Hello!  I'm so excited to be sharing a couple projects for today's blog hop with Clearsnap and the CardMaker teams.  A big thank you to Clearsnap for sending me a selection of chalk inks to use today.  I appreciate their generosity!

I love the properties of chalk inks.  The colors are so vibrant and dry to a lovely, matte finish.  Clearsnap has such a great variety of colors in this range too.

You should have arrived from Chana Malkah Harris's blog.  I've posted the full list below for all the participants, in case you've missed any stops along the way.

Without further ado, here are my projects. 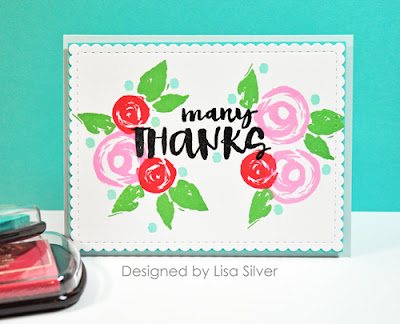 I had gratitude in mind today with both of my cards!

I think this card came together in about 15 minutes.  I used Lipstick Red, Cheeky (pink), Chive (green), and Splash (a light turquoise blue color) to stamp this card.  These colors are so cheerful together!

I lightly marked in pencil on a panel of solar white cardstock where I wanted my sentiment to be.  The easiest way to do this is to set the clear sentiment in place without the acrylic block.  The reason I did this was to ensure the sentiment was going to be on top of any flowers added around it.

I stamped the flowers to frame this area and allowed to completely dry.  I then stamped the sentiment.  The quick addition of the leaves and a few dots of Splash ink finishes the card.  It's a fast design that would be also be perfect if you have multiples to make.  You could also swap out the sentiment for a great birthday or anniversary card.

One thing to note is how well these inks work with clear stamps.  Sometimes larger, "flat" images can stamp mottled or unevenly with some inks.  This is just not the case with Clearsnap's chalk inks.  The impression is solid and crisp.  I just love how well they worked! 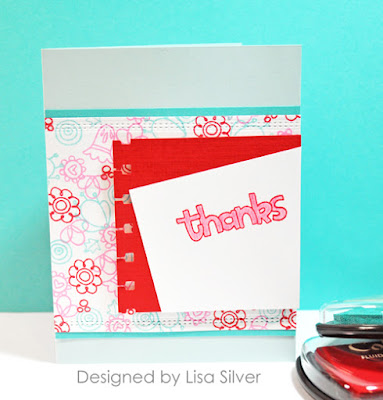 This card has a colorful background created from multiple small images.  I used Lipstick Red, Cheeky, and Splash again.  I just LOVE this color combination!  These chalk inks stamp so cleanly and with great saturation of color.

The finished background reminded me of doodles in a notebook, not that I was ever inattentive at school.  ;)

To keep with the school theme, I used an old EK Success punch to add a bit of notebook edge flair.  The bubble letter sentiment seemed like the thing to do and was colored with a Prismacolor Pink (PC929) pencil.

These colors just make me smile!!!

I'd love it if you'd hop along to Kymona Tracey.  To add to the fun, Clearsnap is hosting a giveaway of $50 worth of ColorBox products, so be sure to comment along the way for a chance to win.

Thank you for visiting,
Lisa

Mama Elephant Creative Cuts, All Prettied Up
Posted by Lisa Silver at 7:00 AM

This work is licensed under a Creative Commons Attribution-NonCommercial 3.0 Unported License.

Stamps and other products shown on this blog may have been donated for promotional purposes by the company(ies) named in the post.